I have been madly practicing my free motion skills this week and I am happy to report that I am almost caught up with Leah Day's Free Motion Quilting Project.

I tend to work in fits and spurts.  Sometimes my life just gets too hectic to make time every day or even each week to practice like I should.  Things have become a bit quieter over the past couple of weeks so I have used the time to my advantage to catch up.

Today I worked on Weeks 34-41 which was mostly Edge to Edge designs. I re-watched each of the video's produced by Leah Day and got down to it.

First we did Flowing Lines: 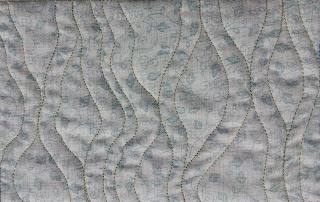 Then came Goldilocks which is basically Flowing lines with some stippling in the gaps. 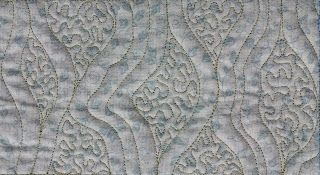 Next was Trapped Paisley which is again Flowing Lines this time with Paisley in the gaps. 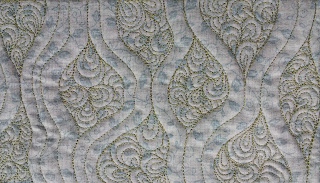 Everything was going relatively smoothly until I got to Jagged Lines.  The principle was the same as for Flowing Lines but instead of flowing lines we used straight lines (jagged).  For some reason I really struggle with straight lines. I couldn't keep them consistent and I wasn't sure how to do the gaps but with a bit of perseverance this is what I came up with. 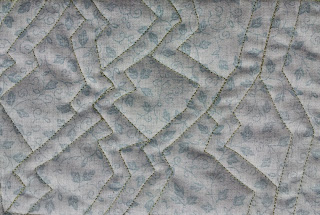 Not my best effort but hey, it's all practice.  Finally, the last edge to edge design was called Lost Data.  This is Jagged Lines with Zippling in the gaps.  My zippling leaves a bit to be desired so this is definitely on my keep practicing list.  I love the concept, I just need to get better at it. 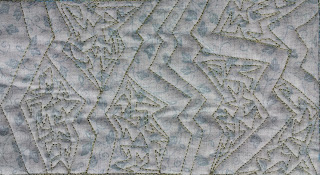 And just for fun l continued the Jagged Lines theme and added some cross-hatching.  This was not one of Leah's designs and l know why - it required a LOT of travel stitching.  It is effective but it took a long time and would make a quilt very stiff.  I was trying to be creative but perhaps I need to keep trying! 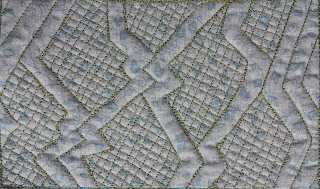 After all those edge to edge designs it was time to try Matrix.  Leah used this design as a quilt busting design on a large scale but I didn't have anything large enough that was ready to quilt so I did it on a smaller scale on a practice sandwich.  I must confess I did this without first watching the video which was probably a mistake.  I think my initial lines are probably a bit too curvy which has effected the overall design but I can at least tick this off the completed list. 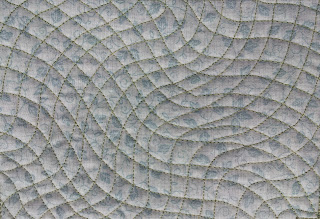 I skipped Week 40 quilt busting design Flower Power for the same reason as above - I didn't have anything  large enough prepared but I will come back to it.  I finished off my 6 hour quilting session today with Pod Quilting.  Again I did this on a much smaller scale than Leah intended.  I based my sample on Leah's 'Pebble Ripples' design which is one of my favorites   I must admit that I did rush this a bit because after 6 hours of quilting my shoulders were really aching and I really wanted to be finished for the day so it is far from my best but it was so much fun to do and a good way to finish up. 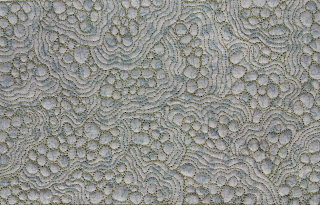 So that's it.  I am almost caught up with the Free Motion Quilting Project.  I have about 8 flimsy's waiting to be sandwiched so my next task is to get some of those done so I can start to quilt on some 'real' quilts rather than practice sandwiches.

This week Bonnie Hunter released Step 2 for the Easy Street mystery quilt and it's Flying Geese.  I love flying geese but they don't always love me back.  I have been using the method of cutting one big square and 4 little ones to make the geese and this has been working but it does my head in trying to do the math for all the squares.

Bonnie showed us in a short video how to make the flying geese units using the Companion Angle and the Easy Angle rulers.  What a revelation.  I have had these rulers since last years Orca Bay mystery and after watching the video I discovered that I have been using the Easy Angle ruler incorrectly all of this time!

I am such a visual person and after seeing the video a light bulb went of in my head.  It all made so much sense.  Making the geese using just 2 inch strips was so easy and every single one of the units turned out the right size.

This method of making the units was much quicker and so effective.  Thank you so much for the video Bonnie.  It made such a difference for me and I am sure many, many more people will benefit from it. 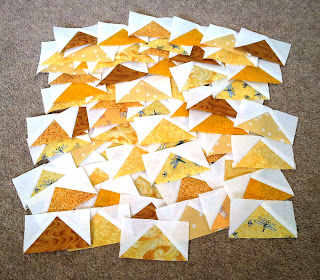 I am making my quilt as a wall hanging so I only need 64 units but I made 70 just in case.

I hope the yellow was the right colour choice.  I am not confident when it comes to colour. I want the yellow to be the colour there was the least of in the final quilt. As Bonnie's purple had the least amount of yardage of the three main colours, I thought it would be safe to assume that it will not be used as much as the other 2 colours (brown and orange in my case).

I am linking up with Bonnie's  mystery-monday-link-up-part-2.
There were over 200 people who linked up last week so make sure you have a gander (my attempt at play on words...get it, flying geese--gander.  Ok funny in my own head!).

Married to my best friend for 25 years. Mum to two gorgeous boys. Slightly obsessed with all things quilty.
Welcome to my happy place.

Can I Get A Whoop Whoop?